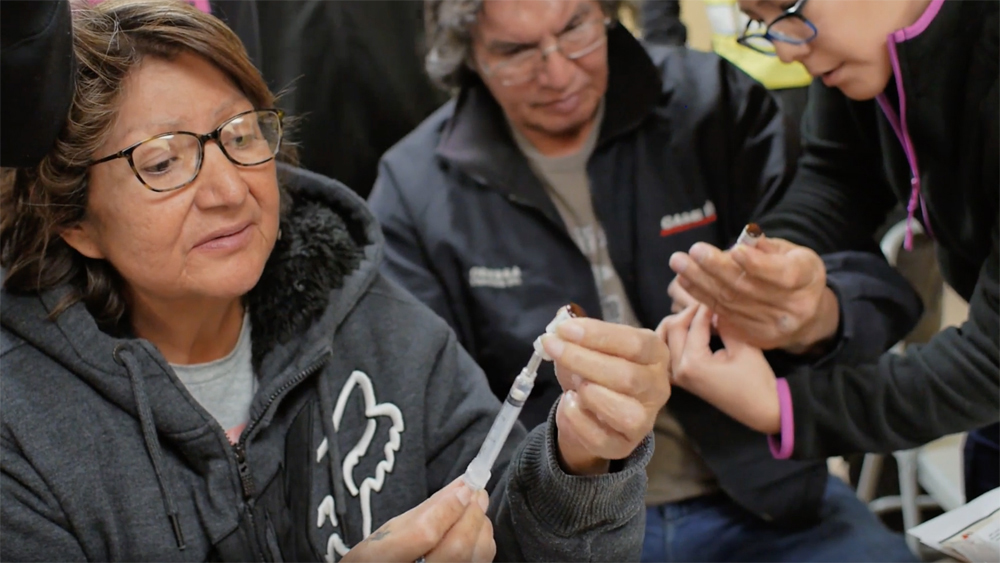 Director and producer Elle-Máijá Tailfeathers opens her documentary “Kímmapiiyipitssini: The Meaning of Empathy” with a peaceful, slow-motion scene of buffalo calves grazing alongside their mothers while the voice of the filmmaker’s mother, a family doctor, is heard gently speaking to a mother about her baby.

A coproduction between Tailfeathers’ Seen Through Woman Productions and the National Film Board of Canada, which is also selling the film, “Kímmapiiyipitssini” is a chronicle of her community’s steady efforts to confront its substance-use crisis and heal by cultivating empathy through harm reduction.

During its world premiere run this week in Hot Docs’ Canadian Spectrum competition program, the film was the centerpiece of a live streamed masterclass with Tailfeathers, who is a member of the Kainai First Nation (Blood Tribe, Blackfoot Confederacy) as well as Sámi from Norway.

“For films about addiction or tough issues affecting our people, the chosen imagery is often rooted in sadness, that trauma, and that tragedy, so I wanted to start in a place where audiences would feel that dreamy sense of hope and love,” Tailfeathers told Cree filmmaker Tasha Hubbard, the masterclass host, whose “nîpawistamâsowin: We Will Stand Up” opened Hot Docs in 2019 and won the Best Canadian Feature award.

Tailfeathers became more widely known last year when the Berlin-premiering “The Body Remembers When the World Broke Open”—which she acted in and cowrote and codirected with Kathleen Hepburn—won several Canadian film awards and was picked up by Ava DuVernay’s Array.

While recognition for her onscreen work is sure to increase with her starring role in “Night Raiders”—Danis Goulet’s dystopian sci-fi feature, which is executive produced by Taika Waititi and was recently acquired by Samuel Goldwyn Films for the U.S.—Tailfeathers is focusing on the work in front of her.

Before filming, she spent a year with people who work on the front lines, live with a substance disorder, or are in recovery, challenging her own attitudes along the way, and figuring out how to tell this story in the most considerate, caring way.

“Abstinence has worked for people who have an addiction to alcohol, but it wasn’t working for people addicted to opioids or stronger narcotics,” she explained. “So, I had to consider how to bring these arguments forward in a way that doesn’t frame the people who believe in abstinence as being in the wrong, and the people who [support] harm reduction as being the heroes.”

As well, Tailfeathers wanted to implement the Blackfoot teachings she’s been raised with into her filmmaking practice. “Kindness as a means for survival is a core teaching that’s gotten us through waves and waves of prior crises that all have to do is settler colonialism,” she said.

In the film, her mother and a group of women from her community visit several harm-reduction programs in Vancouver’s drug-ravaged Downtown Eastside. “My mother had this epiphany that harm reduction is a practice rooted in empathy. It’s a way of meeting people with substance use disorder where they’re at, having realistic expectations, and listening to their needs.”

Hubbard referred to “Kímmapiiyipitssini” as “a path to understand what happened to my loved ones, all of the complicated feelings.”

Tailfeathers said Hubbard’s “We Will Stand Up” shows how their people didn’t create the problems but do come up with the solutions.

“[It is] necessary to remind our people that we’ve been gaslighted by settler colonialism since the start, but that we have resisted and fought back and our ways of being—our culture, our language, our strength as a people—are a way through,” Tailfeathers concluded.

“I feel like there’s something really radical about having hope, I’m rooting our work in a place of love.”

“Kímmapiiyipitssini: The Meaning of Empathy” is produced by Tailfeathers and Lori Lozinski (Seen Through Woman Productions) and NFB producer and executive producer David Christensen (North West Studio), with the participation of Telefilm Canada and the assistance of the Hot Docs CrossCurrents Canada Doc Fund.